Wildlife of..: the Gay Bar Part 1-(A gaysexandthecity expose)

In tonight’s debut episode of Wildlife, we will look at the those elusive creatures that inhabit the often sketchy territory, known simply as the  ‘gay bar’.  This aint your parent’s Nature of Things, to be sure.

This habitat has become extremely popular among it’s wildlife.  In many parts of the world, these ‘watering holes’ have sprung up all over, growing in proportion to that of the demand for space, and variety.

While any gay can be found in these hot spots, there are many examples of the gays that frequent regularly.  And we look at the most common groups in which make the gay bar a significant part of their routine.  Scientists believe that these specific breeds of the gays, are instinctively drawn into the gay bar for gratification.  They have identified these 3 most common of the gays:

the hag fag gays party with their gurls..but looks like these two may pair off...

The Hag Fags: are mostly attractive, but sometimes not so much.  They will only venture into the gay bars with the support of members of the opposite sex (females, for those who only study the gays), those friends that will allow this breed to pretend that they are not interested in availability of potential mates.  These use their female companions as winghags.  If they have the opportunity to hook up with a hottie, they will abandon the hags without much fanfare.  They in fact, are actually performing a form a mating ritual, on the mating display ground, known as the ‘dancefloor’.  They shake, shimmy, grind, flaunt, tease, wink, and many can be seen making a rather spectacle of themselves. They feel safe with these female pack members, providing a cover for their own non-commitment and lack of desire to mate with the various other members of the gays in the gay bar. They, like most gays, have high level of ego, and can be known to flirt on the dancefloor.  Unless they set sights on a specific gay of interest, they may get lucky.  Mostly, the hag fags are out to dance.

the gawker (stalker) gay- make no mistake, it looks fine, but it is out to feed. Hi, what's your size?

The Gawkers (AKA stalkers): This breed of gays, will observe, and ‘scope’ out, or ‘cruise’, the available selections of other gays, waiting to entice a gay who returns the interest.  They will consume as much alcohol as they can, and stalk a partner for pleasure.  They will instigate conversation, flirt with and attempt to attract a companion.  They will attempt to seperate their intended random encounter, from it’s group.   They are usually seeking a one night stand, and like a lioness, can locate the easiest of prey. And hoping for the best abilities… These pleasure seekers are more than just responding to basic sexual urges.  They are much more demanding.  Please be cautious. This breed can be aggressive. 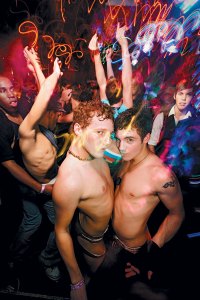 these are dangerous, egoist gays-admire from afar...

Narcisissies: These are among the most crafty and manipulative of the gays.  They appear to be extremely vain, well-groomed and self-absorbed.  They will spend time looking at themselves in mirrors.  Apply make-up and lip gloss, fix hair, and take pictures of themselves with their cell phones.  They often will travel in packs consisting of hag fags and their hags, other narcisissies, dancefloor divas, gossip gurls, and sometimes, the daddies.  They will expose as much of their best features as they can, while mingling and working a trail of their pheromones in an effort to maximize attention and interest.  They will flirt, behave in wild and what they believe to be carefree actions.  They are generally the most feminine of gays.  They are not full fledge queens, or drags, but these young, experimenting gay youths will gender bend, by incorporating female clothing, accessories, and actions of a female in heat.   Be warned: these gurlybois will play with other, as well as other attractive youths, but will seek out sugar daddies to care for them. Do Not Buy These gays Drinks, unless you are willing to risk humiliation, as they will ‘work it’, and then find something more attractive and financially secure, and leave you frustrated.

And stay tuned for part 2,  of the wildlife of the gay bar.  Coming soon.  Check local listings and time zones for the best chance to learn more about the gays in the bar.

Filed under gay, Humour, Silly Me

2 responses to “Wildlife of..: the Gay Bar Part 1-(A gaysexandthecity expose)”